The anatomy of the cervix is summarized in Chapter 1. The colposcopic appearances of normal squamous epithelium, columnar epithelium, squamocolumnar junction, immature and mature metaplasia and the congenital transformation zone are described in this chapter. Awareness of and ability to identify the colposcopic features of the normal cervix provide the basis for differentiating between normal and abnormal colposcopic findings.

The following description of the colposcopic appearance of the normal cervix begins by describing the features of the normal transformation zone.

After application of normal saline solution

On first looking at the normal cervix in a young woman, one sees the cervical os. It usually appears to be encircled by the columnar epithelium, appearing dark red in colour with a grape-like or sea anemone tentacles-like or a villous appearance in contrast to the smooth, light pink squamous epithelium. Each columnar villous structure contains a fine capillary and the blood in the capillary and the vascularity of the underlying connective tissue give the columnar epithelium its strikingly reddish appearance. Small polyps may be detected during examination of the endocervical canal.

The next most important feature to observe is the vasculature. The examination of the blood vessels is facilitated by applying normal saline on the cervix and using the green (or blue) filter on the colposcope to enhance the contrast of the vessels. Use of a higher power of magnification (about 15x), if available in the colposcope, also is helpful. Depending on the thickness or opacity of the overlying squamous epithelium, smaller vessels may or may not be visible. The smaller vessels that may be visible are capillaries that are in the stroma below the epithelium.

Two types of capillaries are apparent in the native or original squamous epithelium: reticular (network) or hairpin-shaped capillaries (Figure 6.2). The reticular pattern is especially visible because the epithelium is thinner in women taking oral contraceptives and in postmenopausal women. The hairpin capillaries actually ascend vertically, loop over, and then descend back into the stroma from where they came. Since these loops are seen end on, the colposcopic view usually is of dots with only a slight, if any, appearance of a loop at each. Inflammation of the cervix (e.g., trichomoniasis) often causes hairpin vessels to form staghorn-like shapes, so that the vessels become more prominent and the loop appearance is more apparent (Figure 6.2). Often no vascular pattern is seen on the original squamous epithelium.

The ectocervical vessel appearances described above are more prominent towards the outer transformation zone, nearer to the original squamocolumnar junction. In the more recently formed immature metaplastic squamous epithelium nearer the new squamocolumnar junction, other vascular patterns become more prominent. These are large (compared to capillaries) branching surface vessels with three recognizable basic patterns (Figure 6.2). The first pattern is much like a tree branching and the second is commonly seen overlying nabothian cysts (Figure 6.3). The regular structure and decrease in the calibre of the vessels towards the ends of the branches all suggest a benign (normal) nature. A third pattern sometimes occurs when healing has taken place after therapy for CIN (Figures 6.2 and 13.9): the vessels are long and run parallel to one another. The lack of other abnormal epithelial features that would suggest neoplasia is a helpful clue that the vasculature is normal. If there is any doubt, it is always prudent to take a biopsy.

The vessels in the columnar epithelium actually are terminal capillary networks. One capillary network is confined to the stromal core of each grape-like villus (Figure 6.4), which projects up to the epithelial surface. With the colposcope, the rounded tips of the individual villi are the main features seen and the top of the vessel network in each villus appears as a dot. Large, deep branching vessels may be seen in some cases.

After application of 5% acetic acid solution

After acetic acid has been allowed to take effect (1-2 minutes), certain changes in the features seen with saline are usually apparent in the normal cervix of a young woman. The colour of the squamous epithelium tends to be somewhat dull in contrast to the usual pink hue, and the translucence is diminished so that it looks somewhat pale (Figure 6.1). In postmenopausal women the colour usually is paler than in a premenopausal woman. The landmarks and full extent of the transformation zone should again be observed carefully. The squamocolumnar junction may be prominently visible as a sharp, steplike white line due to the presence of actively dividing immature squamous metaplasia around the edge, medial (proximal) to the junction (Figure 6.5). The atrophic postmenopausal squamous epithelium looks more pale, brittle, without lustre, sometimes with sub-epithelial petechiae due to the trauma to sub-epithelial capillaries resulting from the insertion of the bivalved vaginal speculum (Figure 6.6). Often the new squamocolumnar junction may not be visible in postmenopausal women as it recedes into the endocervical canal. 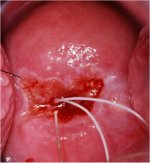 The columnar epithelium should be inspected next. It is usually noticeably less dark red than it was with saline and the pale acetowhitening of the villi may resemble a grape-like appearance (Figure 6.7). After the endocervical mucus among the villi has been coagulated by the acetic acid and wiped away, the topography may be seen more easily. In pregnant women, the villi are hypertrophied and the grape-like appearance will be easier to observe. If a polyp is covered by the columnar epithelium (which has not yet undergone metaplastic changes), the typical grape-like appearance may be visible. More often, especially when it protrudes, the epithelium covering the polyp undergoes metaplastic changes and presents features of various stages of metaplasia. 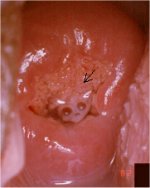 During the different stages of the development of metaplasia, a vast range of colposcopic appearances may be seen. This can present a challenge to an inexperienced colposcopist, who needs to differentiate between these normal findings and the abnormal features associated with CIN. Immature metaplastic squamous epithelium that may turn mildly white after the application of acetic acid is a common source of confusion for the beginners. It is acceptable to take a biopsy when in doubt. Colposcopically, three stages of development of squamous metaplasia may be recognized ( Coppleson & Reid, 1986). In the earliest stage, the translucence of the columnar epithelial villi is lost and the villi become opaque at their tips; the villi widen and flatten and successive villi fuse in clusters and sheets with a pale pink colour (Figures 6.8, 6.9 and 6.10). Consequently the metaplastic epithelium looks like a patchily distributed pale cluster, or sheet-like areas, in the ectopic columnar epithelium.

As the metaplasia progresses, the grape-like configuration of the columnar epithelium disappears and the spaces between the villi are fused with glassy, pinkish-white, finger- or tongue-like membranes pointing towards the external os (Figures 6.11 and 6.12). There may be numerous crypt openings and islands of columnar epithelium scattered throughout the metaplastic epithelium. The rims of the crypt openings may not turn white with acetic acid early in the process of metaplasia, but may turn mildly white as the metaplastic process progresses. Gradually, the tongue-like metaplastic areas fuse together to form a continuously advancing glassy, shining, pinkish-white or mildly pale membrane-like area (Figure 6.13).

Finally, the immature metaplastic epithelium becomes a fully developed mature metaplastic squamous epithelium resembling the original native squamous epithelium, except for the presence of some crypt openings (Figure 6.1) and nabothian retention follicles in the metaplastic epithelium (Figures 1.11, 6.3 and 6.14). The retention follicles, in the beginning, may appear as white, dot-like, areas before they enlarge with progressive accumulation of mucus within the follicle, presenting as pimple- or button-like ivory-white or mildly yellowish areas (Figures 1.11, 6.3 and 6.14). The typical vessel formations in the metaplastic epithelium include long regular branching vessels with gradually decreasing calibre and a network of regular branching vessels (Figure 6.2). These vascular patterns may be seen more prominently over the nabothian follicles (Figure 6.3).

When metaplasia occurs in the epithelium covering the protruding cervical polyp, it is covered by pale white epithelium (Figure 6.15) 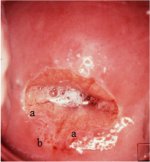 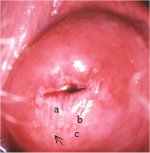 After application of Lugols iodine solution

As described in the previous chapter, glycogenated cells take iodine, so that they have a uniform dark mahogany brown colour when stained with Lugols iodine solution. Therefore, the normal vaginal and cervical squamous (both native and mature metaplastic) epithelium in women in the reproductive age group will take up the stain and become mahogany brown or black (Figure 6.16). This is helpful in distinguishing normal from abnormal areas in the transformation zone that have shown faint acetowhitening. The columnar epithelium does not stain with iodine (Figure 6.16). The immature squamous metaplastic epithelium usually does not stain with iodine or may partially stain if it is partially glycogenated (Figure 6.17). The vascular features, so easily seen with saline, may be difficult to observe after application of Lugols iodine solution. Cervical polyps do not stain with iodine, as they are usually covered with columnar or immature metaplastic epithelium (Figure 6.18). If the maturation of the metaplastic epithelium varies, one may observe various fields of no uptake or partial to full iodine uptake on the polyp. In postmenopausal women, the ectocervix may not stain fully with iodine, due to atrophy of the epithelium.

The congenital transformation zone stains white after application of acetic acid. In this condition, the metaplastic epithelium formed during the latter portion of fetal life, lying distal to the transformation zone formed after birth, is located far out on the ectocervix, some distance from the cervical os and, in some cases, may even extend onto the vagina. It is important to recognize this as a normal condition for which no treatment is necessary.

With acetic acid, the congenital transformation zone will usually take on a mild acetowhite stain and the capillary vasculature may have a fine mosaic pattern (see Chapter 7). It does not take up iodine after application of Lugols iodine solution. If a biopsy is taken of the tissue to confirm the diagnosis, it is best to alert the pathologist of the colposcopic diagnosis. We emphasize that it is always necessary to provide the detailed colposcopic findings to the pathologist.