Home / Training / Manuals / Colposcopy and treatment of cervical intraepithelial neoplasia: a beginners manual / Chapter 3: An Introduction to Invasive Cancer of the Uterine Cervix

Chapter 3: An Introduction to Invasive Cancer of the Uterine Cervix

In very early phases of stromal invasion, cervical cancer may not generate any obvious symptoms or clinical features, and, therefore, is known as preclinical invasive disease. The earliest form of invasive cancer is histologically recognized as microinvasive carcinoma: cancers that have invaded no more than 5 mm deep and 7 mm wide into the underlying cervical stroma. Early invasive cancers appear as a tiny bud of invasive cells that have penetrated through the basement membrane and pushed into the underlying stroma (Figures 3.1 and 3.2). Evidence of stromal reaction to invasion in the form of localized lymphocytic collection or loosening of the stroma surrounding the invasion may also be evident.

As the stromal invasion progresses, the disease becomes clinically obvious, with several growth patterns, which are often visible on speculum examination. Very early lesions may present as a rough, reddish, granular area that bleeds on touch (Figure 3.3). More advanced cancers can be exophytic, endophytic or a combination of both (Figures 3.4, Figures 3.5 and 3.6). Exophytic carcinomas are usually superficially invasive and their bulk grows into the vaginal lumen as a mushroom or proliferating, bulging cauliflower-like growth with polypoid or papillary excrescences. Endophytic cancers may extensively infiltrate the stroma, distorting the cervix, without much visible surface growth. These lesions may expand into the endocervix leaving the squamous epithelium of the cervix intact until the lesions exceed 5-6 cm in a diameter. They result in a grossly enlarged, irregular barrel-shaped cervix with a rough, papillary or granular surface. Such cancers may remain silent for a long time. Partly exophytic and endophytic tumours are usually ulcerated with deep infiltration of the underlying stroma. In all types, bleeding on touch and necrosis are predominant clinical features. Foul-smelling discharge is also common due to superadded anaerobic infection of the necrotic tissue.

As the invasion continues further, it may directly involve the vagina, parametrium, pelvic sidewall, bladder and rectum. Compression of the ureter due to advanced local disease causes ureteral obstruction with resulting hydronephrosis (enlargement of kidneys) and, ultimately, renal failure. Regional lymph node metastasis occurs along with local invasion. Metastatic cancer in para-aortic nodes may extend through the node capsule and directly invade the vertebrae and nerve roots. Direct invasion of the branches of the sciatic nerve roots causes back pain, and encroachment of the pelvic wall veins and lymphatics causes oedema of the lower limbs. Haematogenous spread to lumbar vertebrae and psoas muscle may occur without nodal disease. Distant metastases occur late in the disease, usually involving para-aortic nodes, lungs, liver, bone and other structures. 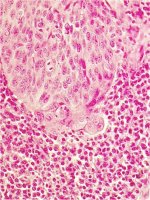 Histologically, approximately 90-95% of invasive cervical cancers arising from the uterine cervix in developing countries are squamous cell cancers (Figures 3.7 and 3.8) and 2 to 8% are adenocarcinomas (Figure 3.9).

Microscopically, most squamous cell carcinomas appear as infiltrating networks of bands of neoplastic cells with intervening stroma, with a great deal of variation in growth pattern, cell type and degree of differentiation. The cervical stroma separating the bands of malignant cells is infiltrated by lymphocytes and plasma cells. These malignant cells may be subdivided into keratinizing and non-keratinizing types. The tumours may be well, moderately or poorly differentiated carcinomas. Approximately 50-60% are moderately differentiated cancers and the remainder are evenly distributed between the well and poorly differentiated categories.

Keratinizing squamous cell carcinoma is composed of characteristic whorls of epidermoid cells containing central nests of keratin (keratin pearls) (Figure 3.7). The nuclei are large and hyperchromatic with coarse chromatin. Intercellular bridges are visible, along with keratohyaline granules and cytoplasmic keratinization. Only few mitotic figures are visible.

Non-keratinizing squamous cell carcinoma (Figure 3.8) appears as irregular, jagged nests of plump polygonal cells invading the cervical stroma. There may be dyskeratosis and intercellular bridges. Cellular and nuclear polymorphism is more obvious and mitotic figures are quite numerous. Keratin pearls are usually absent.

In many developing countries, adenocarcinoma constitutes less than 5% of all cervical cancers. More often than not, it arises in the endocervical canal from the glandular epithelium. The most common form of adenocarcinoma is the endocervical cell type, where the abnormal glands are of various shapes and sizes with budding and branching (Figure 3.9). Most of these tumours are well to moderately differentiated. The glandular elements are arranged in a complex pattern. Papillae may project into the gland lumen and from the surface. Some of the cells may contain a moderate to large amount of mucin.

The presence of tumour cells within the lumen of a capillary space is evidence of aggressive growth potential in both squamous cell and adenocarcinoma of the cervix, and has been correlated with increased risk for regional lymph node metastasis. Invasion of blood vessels occasionally occurs and is a particularly poor prognostic sign, correlating with distant, blood-borne metastasis. Though the cytological features associated with invasive squamous cell carcinoma of the cervix have been well described, cytology is not a reliable method of diagnosing invasive lesions. Identifying these lesions in cytology smears requires extensive experience, as the cervical smear often contains only very few malignant cells among an assortment of debris and red blood cells. Adenocarcinoma of the cervix is often not recognized by cytologists; an experienced cytologist is able to recognize it when the cellular features are at extreme variance compared to normal. The recognition of individual cell types is even more complex. Hence, the final confirmatory diagnosis of an invasive cancer is always based on histopathology. A tissue specimen taken from the periphery of the growth is preferred for diagnosis, as this is more likely to contain morphologically intact tumour tissue, whereas a biopsy specimen taken from the centre of a growth may contain necrotic material which will compromise the accuracy of histological diagnosis.

Treatment planning and assessment of prognosis requires detailed evaluation of the patients general health and the determination of the clinical stage of invasive cancer. The widely used staging system for cervical cancer was developed by the International Federation of Gynecology and Obstetrics (FIGO), and is given in Table 3.1. This is primarily a clinical staging system based on tumour size and extension of the disease in the pelvis. The extent of growth of cancer is assessed clinically, as well as by various investigations to categorize the disease stages I through IV (Table 3.1 and Figure 3.10). Stage I represents growth localized to the cervix, while stage IV represents the growth phase in which the cancer has spread to distant organs by metastases.

The FIGO staging is assessed using methods including inspection and palpation by vaginal and rectal examination, colposcopy, cystoscopy, endocervical curettage, hysteroscopy, intravenous urogram, and chest and skeletal X-rays. Lymphangiography, ultrasonography, computerized tomography (CT) and magnetic resonance imaging (MRI) and laparoscopy may provide additional information, but this information should not be used to assess the FIGO clinical stages, despite the fact that these investigations may provide valuable information for planning treatment. In many low-resource settings, however, speculum examination, per vaginal and per rectal examination are the only feasible approaches to staging. Cystoscopy and radiological assessment with chest and skeletal X-rays and intravenous urograms may additionally be carried out if possible. Staging should routinely be carried out and documented in the case record with a descriptive diagram whenever an invasive cervical cancer is discovered. The investigations and procedures, on the basis of which the staging assessment was carried out, should also be described. 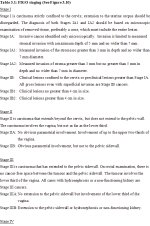 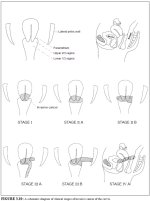 The standard treatment of cervical cancer may involve surgery or radiotherapy or a combination of both. Early cervical cancers (stage I and IIA) may be treated by either procedure. Radiotherapy is the treatment of choice once the disease has spread beyond the confines of the cervix and vaginal fornices, when surgery is not effective. The management of cervical cancer with radiotherapy may often involve a combination of external radiotherapy (for the entire pelvis) and intracavitary irradiation (to the central part of the disease). The addition of intracavitory irradiation to external beam radiotherapy is associated with improved disease control and survival, as compared to external radiotherapy alone for locally advanced disease such as stage IIB and III. Women with microinvasive cancer (stage IA) may be treated with conization or total hysterectomy or extended hysterectomy. Those with stage IB and IIA cancer may be treated with radical (Wertheims) hysterectomy, and pelvic lymphadenectomy or with intracavitary radiotherapy, or with a combination of external radiotherapy and intracavitary radiotherapy. In selected cases of small (<2 cm) stage IB carcinoma, radical trachelectomy combined with laparoscopic lymphadenectomy, to salvage the reproductive function of the patient, can be performed. Radiotherapy and surgery produce similar results for early invasive cancer (stages IB and IIA). Stage IIB and III cancers are treated with a combination of external and intracavitary radiotherapy. Women with stage IV disease are treated palliatively with external radiotherapy and/or with chemotherapy. Concomitant chemotherapy with cisplatin has improved the results of radiotherapy in advanced cervical cancer. Randomized clinical trials have shown a significant gain in overall and disease free survival for cisplatin-based therapy given concurrently with radiotherapy ( Thomas, 2000; Green et al., 2001). A significant benefit of chemo-radiation on both local and distant recurrence has been observed. The absolute benefit with combined therapy in overall survival was 16%. Based on this evidence, concurrent chemotherapy with radiotherapy is emerging as the new standard of care for advanced cervical cancer. Clinical stage of disease at presentation is the single most important predictor of long-term survival; survival rates also decline with advancing age. Other factors influencing survival include general health and nutritional status. Anaemic patients respond poorly to treatment; as do those with HIV-seropositive disease. Several clinical and population-based studies have demonstrated consistently high five-year survival associated with stage I disease (> 75%), with rapidly decreasing survival with advanced stages of disease (< 10% in stage IV) ( Delgado et al., 1990; Fagundes et al., 1992; Kosary et al., 1994; Gatta et al., 1998; Sankaranarayanan et al., 1998; Denton et al., 2000). In a large series of cervical cancer patients treated by radiation therapy, the frequency of distant metastases (most frequently to para-aortic lymph nodes, lung, abdominal cavity, liver and gastrointestinal tract) was shown to increase with increasing stage of disease from 3% in stage IA to 75% in stage IVA ( Fagundes et al., 1992). In a study of 1028 patients treated with radical surgery, survival rates correlated consistently with tumour volume (Burghardt et al., 1992). Five-year survival rates ranged between 91% for patients with tumours of < 2.5 cm3 and 70% for those with tumours of 10-50 cm3. The three-year disease-free survival ranged from 94.6% for stage I tumours £ 5 mm to 59.5% for stage I tumours ³ 21 mm ( Delgado et al., 1990). Advanced clinical stages are associated with increasing frequency of vascular invasion and spread to pelvic and para-aortic lymph nodes and distant metastases.
IARC, 150 Cours Albert Thomas, 69372 Lyon CEDEX 08, France - Tel: +33 (0)4 72 73 84 85 - Fax: +33 (0)4 72 73 85 75
© IARC 2021 - Terms of use  -  Privacy Policy.