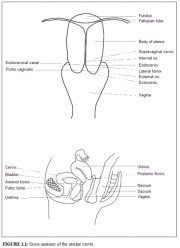 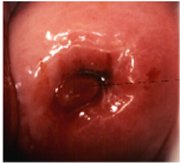 During early embryonic life, the cuboidal epithelium of the vaginal tube is replaced by the squamous epithelium, which begins at the caudal end of the dorsal urogenital sinus. This process is completed well before birth and the entire length of vagina and the ectocervix is meant to be covered by squamous epithelium. This process proceeds very rapidly along the lateral walls, and later in the anterior and posterior vaginal walls. If the epithelialization proceeds normally, the original squamocolumnar junction will be located at the external os at birth. On the other hand, if this process is arrested for some reason or incomplete, the original squamocolumnar junction will be located distal to the external os or may rarely be located on the vaginal walls, particularly involving the anterior and posterior fornices. The cuboidal epithelium remaining here will undergo squamous metaplasia. This late conversion to squamous epithelium in the anterior and posterior vaginal walls, as well as the ectocervix, results in the formation of the congenital transformation zone. Thus, it is a variant of intrauterine squamous metaplasia, in which differentiation of the squamous epithelium is not fully completed due to an interference with normal maturation. Excessive maturation is seen on the surface (as evidenced by keratinization) with delayed, incomplete maturation in deeper layers. Clinically, it may be seen as an extensive whitish-grey, hyperkeratotic area extending from the anterior and posterior lips of the cervix to the vaginal fornices. Gradual maturation of the epithelium may occur over several years. This type of transformation zone is seen in less than 5 % of women and is a variant of the normal transformation zone.
IARC, 150 Cours Albert Thomas, 69372 Lyon CEDEX 08, France - Tel: +33 (0)4 72 73 84 85 - Fax: +33 (0)4 72 73 85 75
© IARC 2022 - Terms of use  -  Privacy Policy.